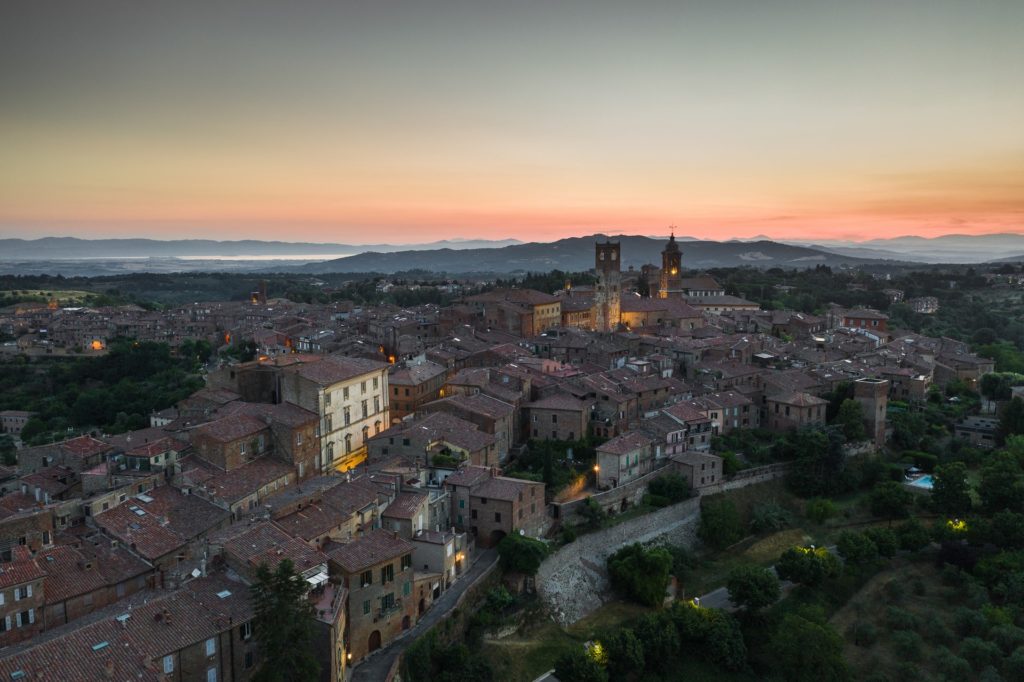 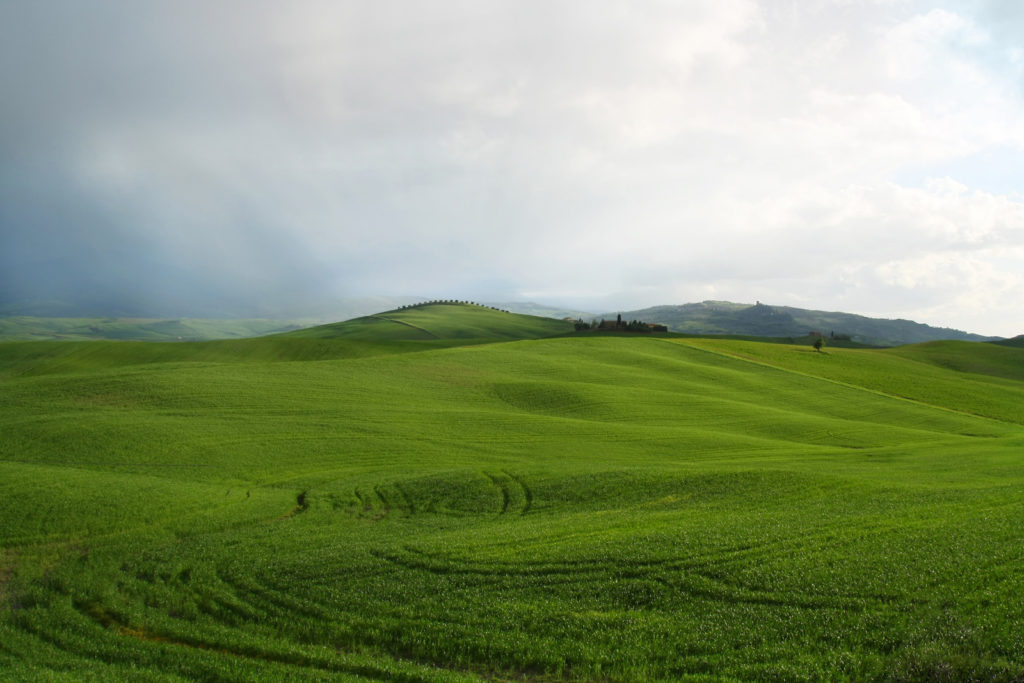 A stone’s throw from some of the most beautiful and famous cities in Tuscany, Hotel Vannucci is the perfect base from which to discover the historical and artistic treasures of this region.
The hotel, just 10 minutes from Chiusi (Siena), is just 30 minutes by car from the Val D’Orcia, whose streets, set among cypress-covered hills, are now symbolic images of Tuscany around the world.

Surrounded by the green Umbrian hills, Lake Trasimeno is the fourth in Italy by extension.
On its shores you will find breathtaking villages such as Castiglione del Lago, Passignano sul Trasimeno, San Feliciano, Tuoro sul Trasimeno and Castel Rigone.
In the centre of the lake instead, three smaller island: Isola Polvese, Isola Minore and Isola Maggiore.
Castiglione del Lago is only 20 km away from Città della Pieve.
Its the perfect town to enjoy a romantic walk on the lake shore and to get lost in the tiny streets of the old town while visiting the medieval fortress and the “Castello del Leone”.
DO NOT MISS: A visit by ferry-boat to the “Isola Maggiore” and a taste of the “Brustico” lake fish. 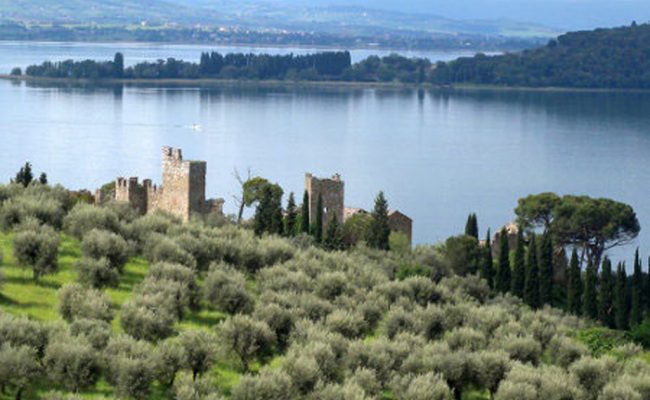 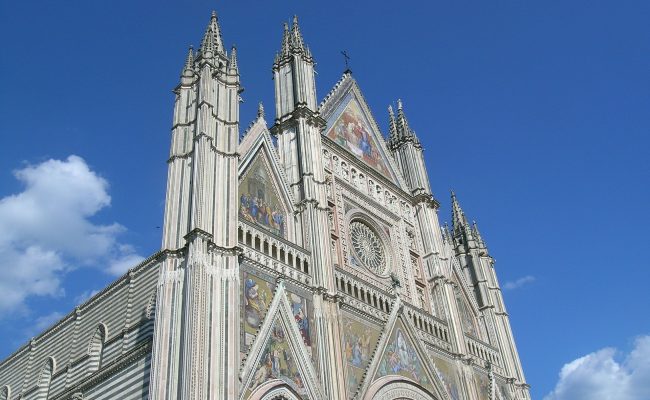 The town of Orvieto is situated on a surreal cliff made by tuff.
Among the main attractions there is the imposing Duomo that dates back to 1290.
One of the most beautiful in Italy, famous for its mosaic façade and a perfect example of a colorful Romanesque-Gothic architecture, rich in works of art.
Just a few steps away from the “Duomo” you can find a whole new underground world made by tunnels and cavities: its “Orvieto Underground”, a multi-purpose complex excavated from the IX century B.C. to witness the Etruscan roots of the town.
Here you can take advantage of many multi-language guided tours available all year around.
Discover a surreal atmosphere by visiting the “Pozzo di San Patrizio” (XVI century), located next to the municipal gardens inside the Albornoz Fortress.
A 62 mt. deep well with two spiral staircases that never meet composed by 248 steps each and 72 windows to give light all around.
DO NOT MISS: A visit of the stunning nearby Civita di Bagnoregio, known as “The dying city”.

Assisi, declared in 2000 a World Heritage Site by Unesco thanks to its historic centre together with the Basilica of San Francesco and the other Franciscan sites.
Located in the central-eastern part of Umbria, Assisi was built with a typical “pink stone” and lies on the slopes of Mount Subasio , dominating the plain crossed by the rivers Topino and Chiascio, tributaries of the Tiber.
The city, which gave birth to St. Francis and St. Clare, has become a global center of the Franciscan order with their message of peace and brotherhood aimed to reach all the world.
This magical city makes all visitors experience a special atmosphere of profound spirituality.
All the locations are impressed by the saint’s history and faith and are preserved in time.
DO NOT MISS: A visit of S. Francis church 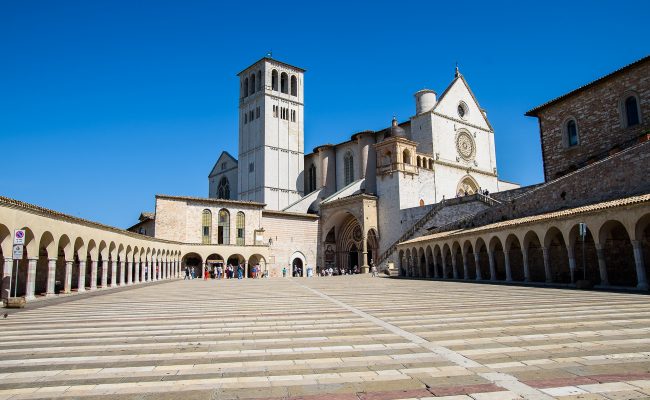 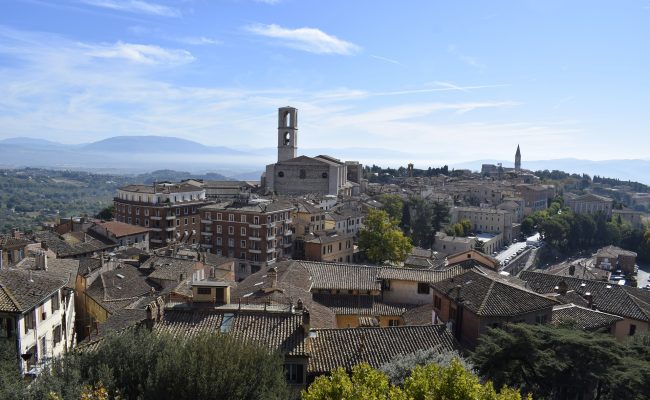 Perugia is an ancient city of rare beauty, it has a small historic centre where you can get lost among authentic medieval streets.
Many are the churches and beautiful monuments to visit such as the “National Gallery of Umbria”, “Collegio della Mercanzia e del Cambio”, the majestic square and “Palazzo dei Priori”.
Perugia, in addition to a large artistic heritage, offers many international events, including the Eurochocolate in autumn and Umbria Jazz in summer.
DO NOT MISS: A walk on the main course with the “Belvedere” in the end.

Cortona is a small, welcoming town in the Valdichiana area in Tuscany, enclosed by a wall in which Etruscan and Roman features are still visible today.
The centre of Cortona develops around the “Piazza della Repubblica”, overlooked by the town hall.
The city is small, but offers several interesting things to visit, including the Diocesan Museum, the Sanctuary of Santa Margherita, Fortezza del Grifalco and the Church of Santa Maria delle Grazie.
Known and famous for its gastronomic excellence and good wine.
DO NOT MISS: A break on the steps of the ancient Town Hall and shopping along the streets. 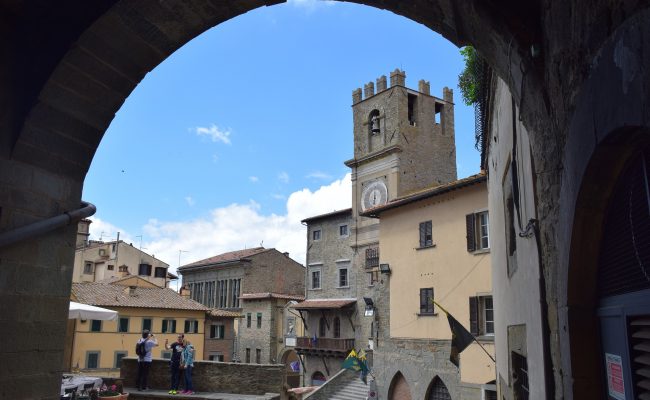 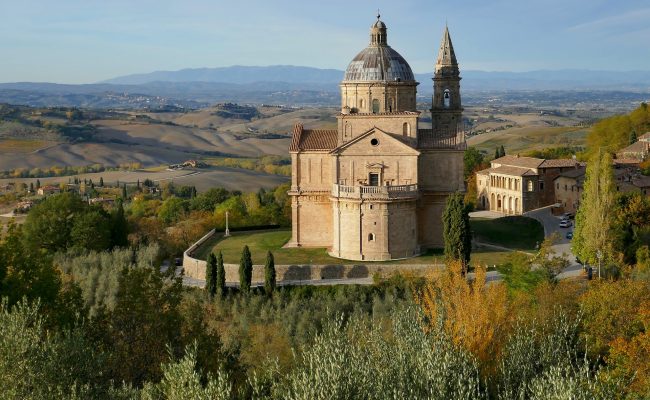 The splendid town, which for its artistic and architectural remains has been called the “Pearl of the ‘500”, preserves its beauty intact. Going up the steep villages, the visitor will discover beautiful palaces and churches where the greatest Renaissance architects transfused the their incomparable art. To see the splendid Piazza Grande, with the Cathedral with an incomplete façade and the Town Hall; all around Renaissance palaces.DO NOT MISS: A visit to the underground cellars of the city

Originally “Castello di Corsignano”, Pienza took its current name in honor of Pope Pius II Piccolomini, who started it, in the second half of the fifteenth century the restructuring with which it tended to concretize the utopian image of an ideal city. village is a small jewel to see, but in particular we must stop in the Duomo, which contains works by Giovanni di Paolo, Matteo di Giovanni del Vecchietta, by Sano di Pietro; there is also a marble altar attributed to Rossellino, the architect who was commissioned by Pope Pius II to redesign the city. Famous all over the world for its excellent product: the Pecorino di Pienza.DO NOT MISS: A walk in the “Streets of love”: Via del Bacio, Via dell’Amore, Via della Fortuna and Via del Buia.
DO NOT MISS: A stroll among the “Streets of love”:Via del Bacio, Via dell’Amore, Via della Fortuna and Via del Buia. 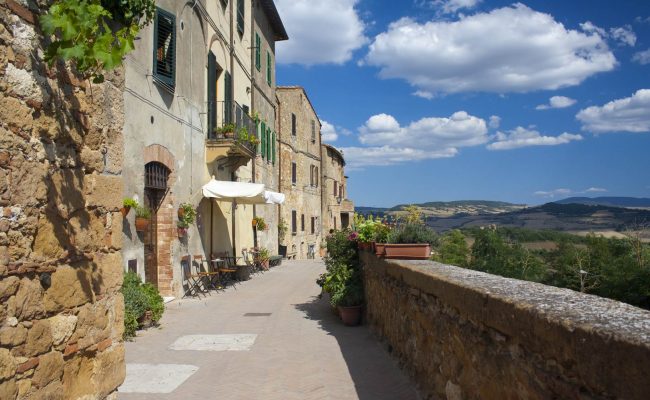 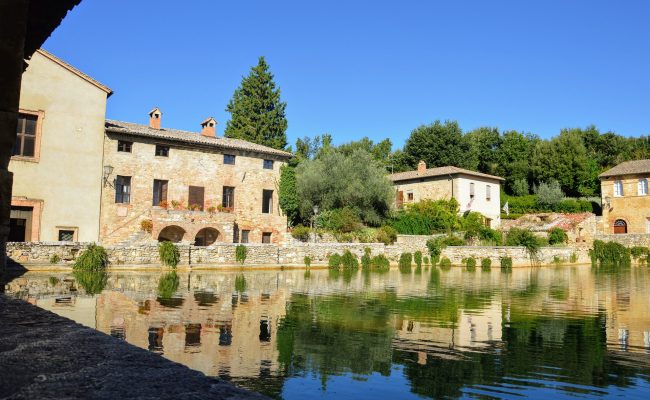 The village rises in the heart of Tuscany countryside, inside the Natural Artistic Park of the Val d’ Orcia. Thanks to its proximity to the Via Francigena (the main route followed in ancient times by the pilgrims who went to Rome) the waters that flow in this place were used since Roman times for spa purposes. In fact, in the center of the village you will find “Piazza delle Sorgenti”, a rectangular sixteenth-century basin, which contains a source of hot and steaming thermal water that comes out directly from the underground.
Since Etruscans and then Romans times, the baths of Bagno Vignoni have been frequented by illustrious figures, such as Pope Pius II, Catherine of Siena, Lorenzo de’ Medici and many artists who had elected the village as a holiday resort.
DO NOT MISS: An aperitif in “Piazza delle Sorgenti” and a visit to the nearby baths of Bagni San Filippo.

Lying among the Tuscan hills, Siena still maintains its first appearance where time seems to have stopped within the walls and was declared a UNESCO World Heritage City in 1995.
Immerse yourself in a timeless journey and discover Siena, starting from “Piazza del Campo” (the main square). From there on just get lost between the narrow streets of the center and enjoy this city full of charme.
Siena is culture, history, tradition and… Palio!
DO NOT MISS: a break in Piazza del Campo to admire the city and the “Palio di Siena” a famous horse race that takes place every year on July 2nd and August 16th. 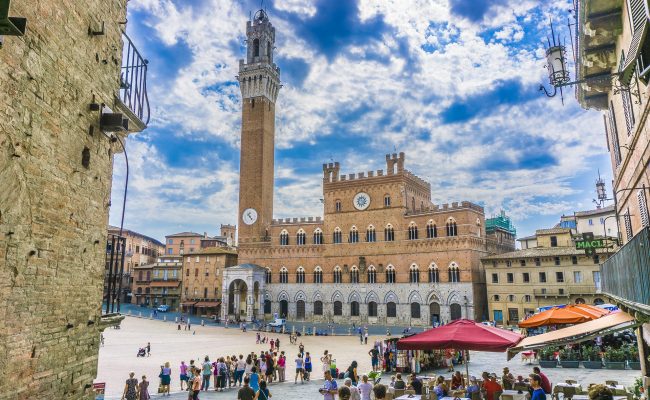 Discover the offers and special packages that we have reserved for you. Take advantage of our promotions for your stay in Umbria. 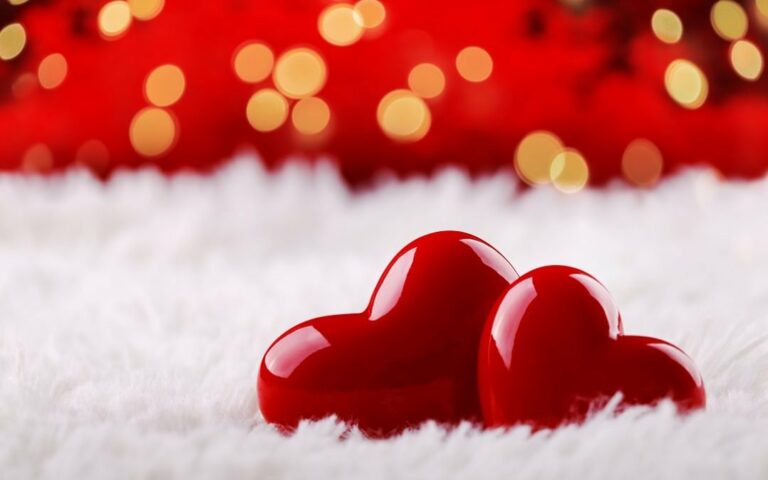 Welcome to Città della Pieve, a small romantic retreat to 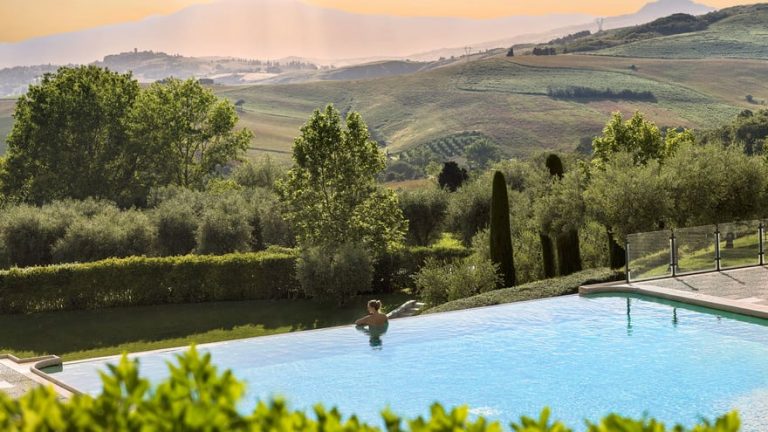 For a regenerating stay dedicated to wellness and relaxation, immersed 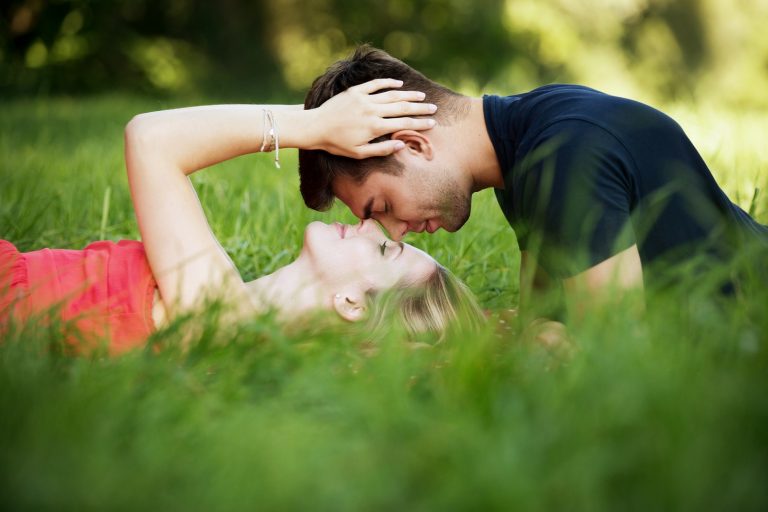 For a relaxing stay dedicated to wellness, immersed in the 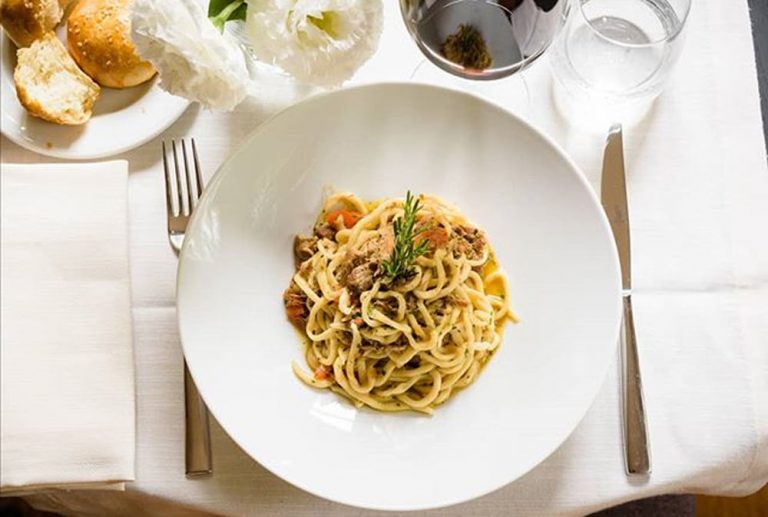 To discover the flavors of Umbria in Città dell Pieve,